Just a regular guy, living somewhere in the heart of Europe

If someone had told me five years ago I would be studying at a university in Scotland, I would have answered something like “Yeah, right!”

To give you a bit of background information about myself, I am a Swiss guy who loves doing Swiss things like skiing, and eating cheese and chocolate! I also wasn’t particularly one of the best students in school. Sometimes, maybe once or twice in a semester, I would get an average mark which was reason enough to celebrate. I would freak out, go home and tell everyone in my family how well I was doing. The fact is, school was simply not my priority. I wanted to make a living from being a professional skier.

As you might have guessed, the skiing thing didn’t work out so well, so I had to change my career plans. But what now? I was spending some time in Canada when my father suggested that I apply to a university in the UK. Leaving home for good to study abroad seemed terrifying, and because of my previous school experiences, I thought that I was simply not smart enough to do such a thing. Nevertheless, I fought my fears and listened to my father. Why not give it a try, right? 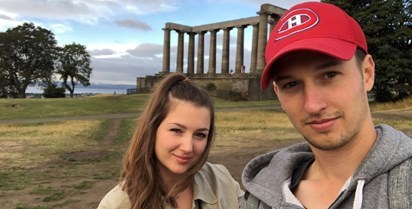 Kenny with his sister at Calton Hill, Edinburgh.

Queen Margaret University (QMU) appealed to me right away. A fairly small university with a good reputation, conveniently located and more importantly, an institution that was offering a course that I was interested in [Business Management]. In addition, the people I was in contact with during the application process were always super friendly and extremely helpful.

My first few weeks at QMU

I remember the exact moment I got accepted to QMU. All kinds of emotions and thoughts buzzed through my head. I was super excited, but at the same time I saw myself failing in a hundred different ways. “I’m not smart enough”. “My English sucks”. “I can’t live away from home for so long…”

I recently read Michelle Obama’s new biography Becoming. A Princeton University graduate, a Harvard educated lawyer, Barack Obama’s mentor at a high-end law firm in Chicago, and of course, a former First Lady of the United States of America. You would think that a person like Michelle Obama would be confident in every stage of her life. However, even she describes that no matter what decision she had to make, she often doubted herself, saying “Am I good enough?”

The moment I walked into the halls of residence at QMU, half of my worries disappeared. In my flat there were students from France, Ireland and Scotland - all amazingly nice with the same or similar concerns in their heads.

I was astonished by how many international students there were. In fact, 46.4% of all students at QMU come from outside the UK. Mispronouncing a word becomes less awkward with German, Spanish, Polish, Austrian, French and Kenyan students around you! QMU is incredibly multicultural and the relatively small size of the University makes you feel more at home.

One of the best things I find, to this day, is that there aren’t many other Swiss students. This may sound weird but escaping your own culture is kind of fun. You can reinvent yourself, do things you have never done before, and talk to people from all over the world. You can also have fun learning to understand the Scottish accent… which is harder than I thought it would be! 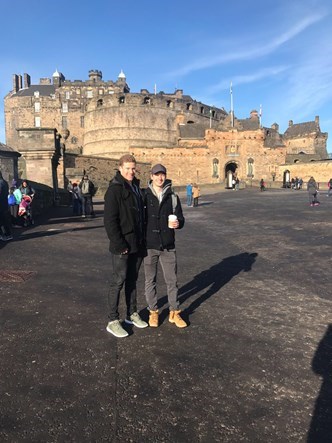 Another reason why I chose to study in Edinburgh was that I wanted to be different. People at home who are my age commonly end up on the same career path as one another. They go to the same school, stay around the same people, go to the same university and work in the same region. I wanted to be different. I want to go back to Switzerland on completion of my degree and be unique in some form. QMU has given me a chance to be different and stand out from the crowd. I strongly believe that ‘being different’ can turn out to be a huge advantage in today’s competitive job market.

Moving away from home to study abroad has another advantage. Leaving your family behind for a few months might be hard, but people often miss the good things that come with that decision. Firstly, your career becomes your priority because it is the main reason why you left home. Secondly, you are ultimately responsible for yourself, which can give you the flexibility you need in your life. This commitment, combined with the passion you have for the chosen course, provides you with an advantage you may not realise at first. You’d be surprised by what you’re capable of if you commit yourself to what will be one of your biggest life decisions.

I am currently a second-year Business Management student, and guess what? My marks are actually pretty decent and I am more confident about myself than ever before! If you’re up for a life-changing adventure, follow in the footsteps of me and the many, many students before me.

And yes, you are good enough!

At this point it's fair to say that I'm all about QMU. At one stage this year I not only studied,... read more

With a new year, comes a renewed drive to trim the waist line and shed the extra pounds gained du... read more

Returning to work from holiday is often a chore however, on this occasion my spirits were lifted... read more

If you’re reading this, chances are you are thinking of studying at Queen Margaret University, Ed... read more

Choosing a university is a big decision. As well as scoping out what kind of courses are on offer... read more

Blog Post
Five films to check out this LGBT History Month (and beyond!)

Growing up in the late 1990s/early 2000s, being gay wasn't something that I discussed with my fri... read more

We’re often asked about teaching as a career and the process involved in applying for teacher tra... read more

At this time of year, we start sending out invitations to interviews to applicants for courses wh... read more

Blog Post
Making the most of a UCAS exhibition

Going to a UCAS exhibition can be an overwhelming experience. The events are bustling, with lots... read more

Blog by Stephanie Arsoska and the Practice Research Group. This short reflection explores some of... read more