Suzanne Aitken is a Lecturer in Dramatherapy, within the Division of Occupational Therapy and Arts Therapies at Queen Margaret University, Edinburgh. Suzanne also has affiliations to several other organisations;  Registered with Health and Care Professions Council (HCPC) Arts Therapist (Drama), Registered with Nursing and Midwifery Council (NMC) Registered Mental Health Nurse and a Full Member of The British Association of Dramatherapists.

Suzanne has a background in theatre and applied theatre practices having studied BA Dramatic Studies at RSAMD, Glasgow. On graduating her theatre practice soon developed and became established within mental health charities and working within learning disabilities communities in and around the Glasgow area. A curiosity to learn and develop a greater understanding of both the client groups and the impact of theatre, Suzanne trained as a Mental Health Nurse at Napier University, Edinburgh, before training in the Sesame Approach to Drama and Movement Therapy at CCSD, London.

Suzanne has recently stepped back from her role in the NHS after 24 years service, where over those years she had held a range of roles across both Adult Mental Health Services and Child and Adolescent Mental Health Services. She continues to hold a private practice offering Dramatherapy and Clinical Supervision, and also offers Supervision, Reflective Practice and Consultancy to third sector agencies across Scotland. 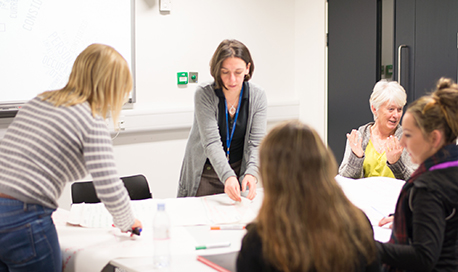