A recent university graduate has designed and constructed a stunning new altar frontal for the tiny ancient chapel located in Edinburgh Castle.

Lucy Deady, a graduate of the Costume Design and Construction degree course at Queen Margaret University, Edinburgh, created the new altar frontal to interchange with the original one that had been damaged by mice. The 24 year old graduate was commissioned to develop a fitting design and construct a new altar frontal by St Margaret’s Chapel Guild, the organisation which cares  for the 12 th century chapel. 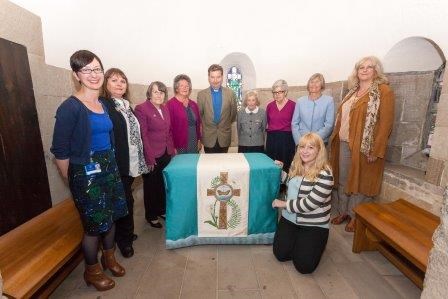 The beautiful new altar frontal will be a key feature in St Margaret Chapel which is known to be the oldest surviving building in Edinburgh. The building was constructed in the 12th century. The Chapel, which is an example of Romanesque architecture, was restored in the 19 th century. Although owned by Historic Scotland, St Margaret’s Chapel Guild has responsibility for the altar frontals, vases, kneelers and benches. Members of the Guild all have the name ‘Margaret’ as their first or subsequent name.

The Guild has been associated with Queen Margaret University for several years due to its association with St Margaret. Knowing its specialism in costume design, the Guild was keen to offer the work to a student at QMU who could draw on their creative sewing skills to design and construct the frontal.

It was decided that Lucy Deady, a highly-skilled graduate of the QMU course, would be the appropriate person to develop the concepts and sew the cloth.

The design includes various elements which reflect key themes. The boat signifies the gift of the ferry which Queen Margaret provided to offer safe passage for pilgrims who were travelling to St Andrews from South Queensferry. The name Margaret comes from a daisy like flower called a Marguerite, so that flower is also represented.  The Guild wanted to include a Celtic pattern and cross – these link to Scotland and the Chapel. The waves, which feature in the main design, are also used as a trim for the cloth and are representative of Margaret’s journey from her original home in Hungary to Scotland.

Lucy concluded: “I have a passion for machine embroidery and I thought this project offered me a wonderful opportunity to develop a modern design, different to the current cloth but also in keeping with the historical chapel.  It has been a challenging project but one which I am extremely proud of and which I have really enjoyed working on.”

The new altar frontal was unveiled at a ceremony in St Margaret Chapel in Edinburgh Castle on Monday 15 June.

For media enquiries or to access one of our experts.